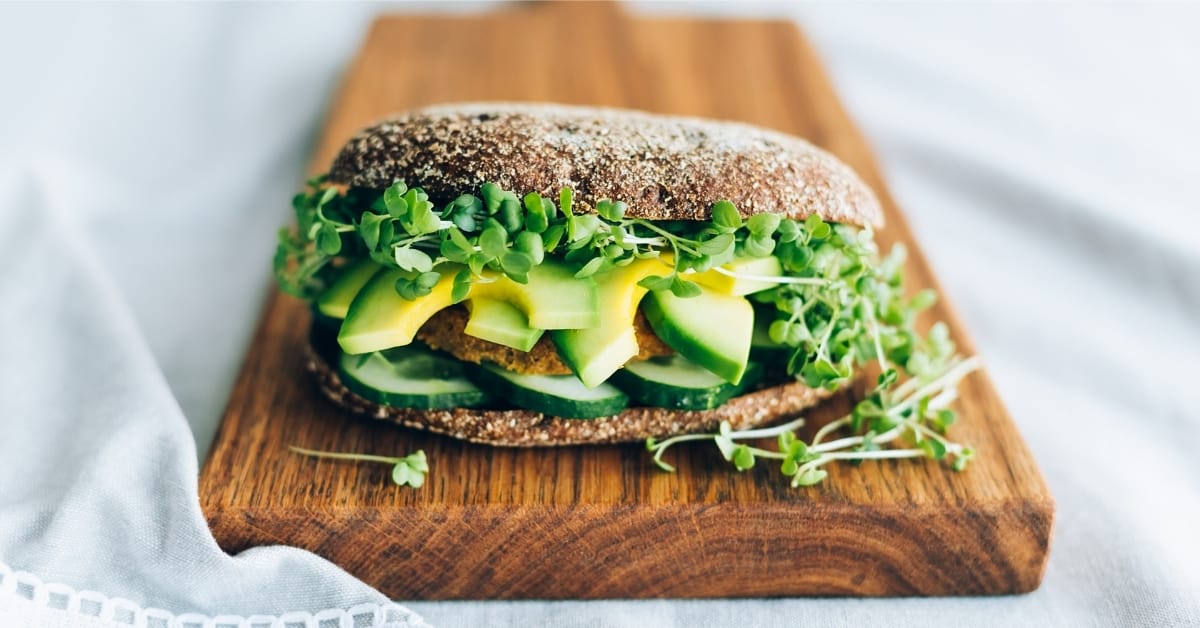 Are you curious to get the scientifically researched answer about “are microgreens a superfood?” then this article is for you!

Microgreens are a health food trend with roots in Southern California and are widely known as superfoods. But what does that even mean? What are superfoods? And are microgreens really healthier than their fully grown counterparts?

Microgreens are considered superfoods because they tend to be more nutrient-dense than their mature counterparts. In some cases, a microgreen can have 200 or 300 times more nutrients in comparison to a fully grown plant. However, not all microgreens are the same as some pack more nutrition per gram than others.

What Exactly Is A Superfood?

There are no standardized and regulated criteria for what is labeled a “superfood.” Superfoods are generally accepted as any food source that offers a maximum amount of nutrients for a minimum amount of calories.

Other superfoods have some aspect or another that is believed to prevent certain diseases:

The word “Superfood” is actually a marketing term. While superfoods do offer health benefits, the term itself is meant to sell more of an item and at a higher price. People will pay more for the food they believe to be healthier for them.

When was the world Superfood first used?

It is believed that bananas were the original superfood. The earliest known use of the term superfood was in the early 20th century by the United Fruit Company in its marketing campaign to promote its major import of bananas.

Microgreens are the seedlings of edible vegetables, herbs, and some grains. Not to be confused with sprouts or baby greens, microgreens are planted in soil and harvested within 14 days of germination, when they only have their seed leaves.

In a USDA study of 25 microgreen varieties, microgreens were generally found to have more vitamins and carotenoids when compared to their mature counterparts.

The microgreens with the highest combined value of Vitamin C, Vitamin K1, and Vitamin E are:

In addition to having higher concentrations of nutrients, microgreens are said to have a more intense flavor as well. A little goes a long way to add a boost of nutrition and flavor to a dish.

One note about variance: the actual amounts of vitamins and carotenoids in your microgreens can vary from the list provided.

These variations will depend on:

Here are some of the best microgreens based on the USDA study, along with a little information about their flavor and the best ways to enjoy them.

Red cabbage is one of the heaviest hitters in terms of nutrient density. Note in the table below that the microgreens can have up to 300 times more vitamin E than mature red cabbages:

Red cabbage microgreens are said to have a milder, sweeter taste than a mature red cabbage, which has a peppery, earthy flavor when eaten raw.

Like many other microgreens, they are best suited for raw applications; the microgreens are delicate, and their flavor and texture will not hold up against sustained high temperatures.

Red cabbage microgreens can be added to a smoothie or as a garnish for a splash of color and flavor to many dishes, including:

Amaranth is a superfood in its mature state; but the nutrients are even more concentrated as microgreens. It is referred to by some as an “ancient grain,” since it is believed to have been domesticated some 6,000 to 8,000 years ago. In addition to the vitamins and carotenoids, amaranth contains high amounts of complete protein.

The specific variety in the USDA test was the Garnet Amaranth, and the following chart details its nutrient information:

The taste of amaranth microgreens has been described as sweet and earthy. They can be likened to spinach or even mustard greens, but amaranth lacks the spice of mustard.

Amaranth is best suited for raw applications and can complement savory as well as sweet dishes. It can be used as an addition to sandwiches, salads, or smoothies, or as a garnish for:

Daikon radishes are said to have a tender, crisp texture. The flavor is described as sharp with a peppery heat.

Basil is a member of the extensive mint family of plants that also includes rosemary and lavender. In the USDA microgreen study, one of the varieties used was green basil. Green basil is vague, but we believe that they are testing the most common basil in the U.S., which is known as sweet or Genovese basil.

Green basil is described as a clove-like flavor with hints of citrus, pepper, and anise (the flavor of licorice). It is best used in raw applications. The flavor complements both savory and sweet dishes.

Some recommended uses of green basil are:

Celery is not just for peanut butter. Celery has very little calories and almost no protein or fat. If you are eating celery intending to fill up and lose weight, it can cause health problems if you aren’t getting enough calories.

If you’re eating celery to add some nutrition to your diet, microgreens are going to be the best way to do so with celery:

Celery microgreens are best suited for raw applications and only added at the very last stages of dressing a dish. Some recommended uses for them are:

People have strong opinions about cilantro, also known as coriander. Rarely do people just find cilantro to taste okay; they typically either love the taste or hate it.

You can see the comparison of cilantro microgreen and mature plant nutrients below:

You should fall into one of two camps: either you enjoy the strong citrusy flavor with the hints of pepper and fresh-cut grass, or you think it tastes like soap. Scientists believe the reason for this is some 15% or so of the population have a gene that detects aldehyde chemicals. Cilantro microgreens are best used raw, specifically as a garnish.

Some uses of cilantro microgreens include:

What are Daily Recommended Values?

To better understand the amounts of micronutrients in the listed microgreens, here are the recommended daily values of the micronutrients they contain:

Also known as ascorbic acid, Vitamin C is an essential, water-soluble vitamin that acts as an antioxidant. This means it helps protect cells from unstable molecules or atoms within the body.

In addition to being an antioxidant, Vitamin C also:

Also known as phylloquinone, Vitamin K1 is a fat-soluble vitamin. Vitamin K is a coenzyme for carboxylase, an enzyme necessary for the synthesis of proteins involved in the following body functions:

Carboxylase is dependent upon vitamin K and can’t function without it.

Tocopherols and tocotrienols are fat-soluble compounds that act as antioxidants that are collectively referred to as “Vitamin E.”

In addition to acting as an antioxidant, vitamin E:

Lutein and zeaxanthin are two separate carotenoids. They are not converted to Vitamin A. These antioxidants accumulate in the retina and are best known for protecting your eyes from:

In addition to protecting your eyes, recent studies indicate that lutein and zeaxanthin are also beneficial to your skin as they:

Beta-carotene, is a carotenoid. Carotenoids are fat-soluble red, orange, and yellow pigments that give color to plants; they are also antioxidants. The body converts beta-carotene into vitamin A. Beta-carotene in itself is not essential; however, vitamin A is essential.

Vitamin A is necessary for the following:

Vitamin A can be toxic if too much pre-formed Vitamin A is consumed in your diet or if you take too many Vitamin A supplements. In contrast, too much beta-carotene is not a concern, as its conversion to Vitamin A in the body is regulated.

On the other hand, eating too much beta-carotene over an extended period can lead to carotenemia. Carotenemia is a condition where the skin takes on a yellow color. It is harmless but can be mistaken for jaundice.

Microgreen Availability and Ease of Growing

Another advantage that microgreens have over the mature versions of themselves is that they can be grown and harvested year-round.

Microgreens do not take much area as you will be harvesting them before they grow into larger plants. Also, since the plants will not be maturing, they do not require the same space between plants. So, you can really pack them into the growing container. Furthermore, microgreens can be grown indoors or outdoors, as long as you have a light source.

Since microgreens take such little space, you can have crops rotating. One can be germinating as the one before it comes ready to harvest.

Buying microgreens can be very expensive, but growing them at home gives you the benefit of knowing what went into the production as well as the added benefit of maximum freshness.

Not All Plants Are Suitable for Eating as Microgreens

Since microgreens are merely the seedlings of a plant harvested shortly after germination, it would stand to reason that you can harvest microgreens of any plant. This may be true, but you should not eat the microgreens of all plants.

For example, you should avoid all microgreens in the nightshade plant family.

The family of nightshade plants includes:

Nightshade plants contain toxins such as solanine. The toxins are more heavily concentrated in the stems and leaves of the plants. This is believed to be a defense mechanism of the plants to deter pests from eating them.

Symptoms of solanine poisoning can include:

This recipe leaves room for the use of extra microgreens in addition to what it calls for. Also, salmon is considered a superfood.

This recipe doesn’t specify which microgreens to top the salmon with. Perhaps this means it’s the chef’s choice? Also, cilantro microgreens could be used in the salsa for additional nutrition.

For the topper, recommended microgreens include:

This recipe includes not one, not two, but three superfoods:

Pro Tip: While the microgreens might look nice as a garnish, why not throw some in the mix for the added nutritional value?

This recipe is specific with its choice of microgreen! It’s also relatively simple.

This is a simple recipe, even if a little fancy with the truffle oil. In addition to the microgreen bed, one might consider topping the dish with chive microgreens.

Microgreens are superfoods because they are packed with nutrition. This may not be the healthiest way to use your microgreens, but it will incorporate them into your diet.

This recipe lends itself to the use of many more microgreens, as well. The following microgreens could be muddled or blended into the drink as a nice addition:

And in addition to using horseradish microgreens as a garnish, the following microgreens would also make excellent edible garnishes:

Microgreens may be small, but they pack a massive punch of nutrients, making them a popular superfood. Certain microgreens are more nutrient-dense than others, but they are all excellent additions to any diet. If you’re looking for a way to eat healthier, give microgreens a try!