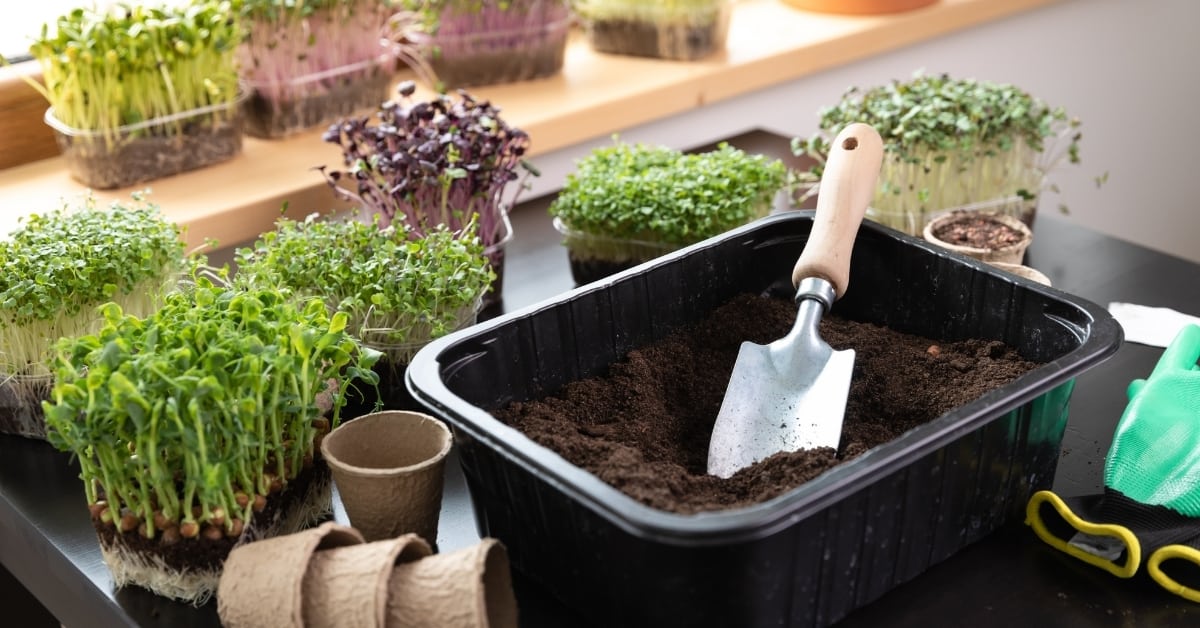 When it comes to growing vegetables, soil and plant nutrition are among the most important aspects of giving plants, everything they need to thrive. Microgreens need high-quality soil (or soil-less mix) because microgreens need to germinate and grow in a short amount of time.

A soil mix isn’t always necessary for microgreens if a soil-less media or fiber mat is used instead in a hydroponic system. Still, good soil for microgreens should be friable and contain high levels of nutrients to promote fast germination and growth for a faster harvest. The soil in microgreen trays can be reused for additional nutrients.

A healthy soil mix is crucial to success when it comes to growing microgreens. Read on to learn more about how soil nutrition impacts microgreen growth.

There are several qualities of good soil that are especially important when it comes to using the soil for microgreens.

The above qualities can be achieved in a microgreen potting mix, whether you use a commercial seed starting mix or make up a homemade one.

Components of Good Soil for Microgreens: Several different soil components make it a good match for growing microgreens. The trick to getting good germination and sprouting results with microgreens is providing microgreen seeds with a well-structured soil.

The best soil type for growing microgreens and other vegetables is considered granular soil since it is the soil type that is best for the formation of roots and taking up nutrients from the soil. Coarse soil is friable and will crumble easily in your hand.

Good soil is made up of several different aspects. Here are some of the things that all soil needs to be compatible with thriving plant life:

These four components are crucial for achieving a good soil composition that effectively cultivates quick-growing plants like microgreens.

Many gardeners grow microgreens in soil trays, and this is an easy enough way to achieve a good soil composition for your greens. The advantage of using a soil tray is that you have more control over the kind of soil that is going into the tray.

There is also an alternative to using soil for growing microgreens—soil-less mixes or fiber mats. Instead of soil, microgreens are just as easily grown in a fibrous material such as peat.

There are a couple of advantages to using soil-less fiber mats for growing microgreens versus using soil, such as the following:

When choosing a soil to plant your microgreens in, you have two primary options to choose from:

Both homemade soil mixes or commercial soil mixes can be used to grow microgreens; the one you prefer is just a matter of preference. While commercial soil mixes are costly compared to just getting some soil from your yard, they give you a lot more control over soil parameters, such as nutrients, pH, and other factors.

Needs of Microgreens Other Than Soil

Soil plays a vital role in microgreen nutrition, but they aren’t the only thing that microgreens need to grow well. There are a few other things you need to provide microgreens to get the most out of your harvest.

Here are some of the other things you need to supply to nourish microgreens other than good soil:

If all these nutrients are provided along with a structured soil, your microgreens should grow efficiently.

Tips for Using Soil with Microgreens

Choosing the right soil and knowing how to take care of it can make a big difference in whether you succeed with your microgreen garden.

Follow these guidelines to get the most out of using soil to nourish your microgreens:

If you take these few steps to make both your seeds and your soil more viable during the planting process, you will end up with a much better crop of microgreens to harvest after only a few weeks.

Alternatives for Soil with Microgreens

Soil can be used to grow microgreens, but there are other ways to ensure that microgreens get the nutrients they need without using a soil-based system. Microgreens can also be grown on fibrous mats of material (such as peat) to grow them without using soil indoors.

Microgreens can grow just as well on fiber mats and in soil-less media as they can in soil, and there are many benefits of using a soil-less system for microgreens, such as the following:

How to Sterilize Soil for Microgreens

In some cases, it can be advantageous to use native soil to germinate your microgreens, especially if you live in an area with rich, fertile soil. However, native soil and potting soil mixes that aren’t seed-starting mixes need to be sterilized before being used in microgreen trays. This helps prevent the spread of soilborne pathogens.

Soil can be easily sterilized by placing it in an oven for around 30 minutes at 180 degrees. This is enough time for any bacteria or fungus in the soil to be destroyed. (Source: Gardening Know How)

Sterilizing soil can also be done in the microwave or by steaming. Soil should be steamed in a water bath for thirty minutes or microwaved for two and a half minutes. It’s important to note that soil should not be heated longer than thirty minutes, which can encourage the build-up of chemical toxins.

The risk of not sterilizing the potting mix or native soil before using it in a seed starting mix is that disease can quickly sweep through the seed tray and kill your seedlings. This is a minor inconvenience if you’re just growing microgreens for home use, but it can be devastating if you are growing microgreens for a local market.

Here is a list of some of the best commercial seed-starting mixes you can get to help get a jumpstart on germinating your microgreen seeds:

An excellent commercial seed-starting mix can take much of the guesswork out of trying to get your microgreen trays started since all you have to do is pull the dirt out of the bag and get going. You won’t have to worry about getting your soil structure proportions right or making sure the soil is sterile.

What is a Good Homemade Mix for Microgreens?

If you want to make your own microgreen soil mix, it doesn’t require a whole lot of ingredients.

Here are the necessary ingredients for a good microgreen mix:

This mixture provides a good mix of friability, moisture retention, and nutrients to give microgreens a good head start in growth.

Will Microgreens Grow into Full-Sized Vegetables?

Many gardeners who are new to microgreens may wonder if they can just grow full-sized vegetables from their microgreen seeds. Most microgreens will become stunted by their growing conditions in a shallow microgreen tray, which will keep them from achieving their full potential size. (Source: Quantum Microgreens)

You can allow microgreens to grow beyond the 2-3 weeks it takes them to get to microgreen harvesting size, but they will usually remain a small size. Since microgreens don’t bolt and deteriorate in a shallow microgreen tray in the same way they would if they were planted outside, microgreens can be cut and collected as long as they’re putting out fresh greens.

Microgreens such as pea shoots will not grow into full-sized vegetable plants because they will not receive enough direct sunlight or nutrients to put out proper flowers and fruit in an indoor microgreen setup.

Do Microgreens Need to Be Fertilized?

No, microgreens should not need to be fertilized as long as you planted your seeds in a seed-starting mix that contains organic material such as compost. Full-sized vegetables that are grown outdoors are fertilized to encourage them to produce flowers and fruit. Since microgreens are harvested well before this stage of the plant’s development, fertilization isn’t necessary.

As long as some organic material is added into your seed-starting mix to act as a nutritional backbone for the soil, adding additional fertilizer is a waste. It runs the risk of burning your plants.

Can You Reuse Your Microgreen Soil?

Yes! A significant benefit of growing microgreens in an indoor tray is that the soil can simply be turned over and reused when the greens have been harvested. This is an environmentally friendly way to collect crops repeatedly, and the soil doesn’t become depleted because the old root systems of the previous microgreen crops are re-added to the soil. (Source: Plant Hardware)

Eventually, once your microgreen soil has been reused several times, it may develop aggregates that cause it to become clotted and not as friable as it was, to begin with. At this point, it may be a good idea to recycle the soil mix into the garden and start with a fresh batch to ensure that seeds can germinate easily without getting hung up in the soil.

Light and water are both critical for making sure that microgreen seeds germinate properly. Still, without a good soil foundation (or a soil-less media to provide moisture retention and nutrients), your microgreen seeds won’t get the nutrition they need to grow well.

Ensuring that you either put together a good seed starting mix or buy a reputable commercial mix can be the difference between success and failure with your microgreen harvest.