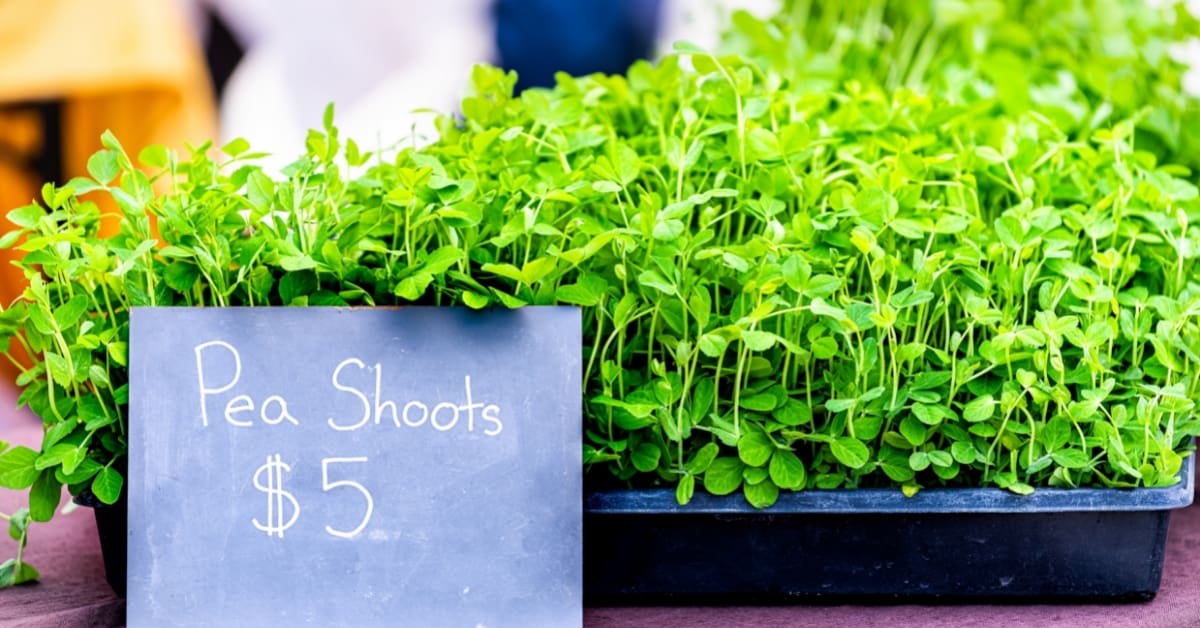 If you aren’t sure what a microgreen is or why are microgreens so expensive, don’t stress it. We’ve got everything you need to know about microgreens, their cost, and why you should love them!

Microgreens are becoming a popular staple in many homes because of their enhanced nutritional content and versatility, but they come at a price. If you’re lucky enough to find microgreens at your local market, get ready for a bit of sticker shock.

Microgreens are the shoots of vegetables that are grown either in soil or hydroponically in a growing medium. They are more expensive because of how they are grown and the number of seeds required to produce a decent yield.

Microgreens are vegetable shoots. They are grown in small containers tightly packed together and harvested shortly after the plant puts out its first true leaves. To do this, microgreen farmers cut the plant away just above the dirt or growing medium.

The result is similar to a sprout, but with more flavor, tons of nutritional value, and a bit more leafiness.

These are some of the most common types of microgreens are grown from the following seeds:

Just about any edible vegetable can be grown as a microgreen with good results, but if this if your first foray into eating microgreens, stick to some of these favorites.

Why are Microgreens so Expensive?

Microgreens aren’t cheap. They cost around $30 per pound and sometimes more depending on the grower, location, and variety. But we assure you they’re worth it!

Microgreens are expensive for several reasons. No one reason on their own is responsible for the added cost, but together, they mean that you’ll be paying a bit more than you’d like for microgreens.

If microgreens continue to increase in popularity and more growers begin selling directly to consumers, the price of them will likely come down. If the cost of microgreens is an obstacle for you, you should consider growing your own. We’ll talk more about this later.

What Makes Microgreens Unique and Rare?

Microgreens are amazing and worth the extra expense or the extra work to grow your own. There is a reason they are so popular right now! Let’s take a look at what microgreens have to offer:

Microgreens are Packed with Nutrition

The main reason microgreens are so popular is because they are packed with nutrients like lutein, beta-carotene, and all the vitamins. These nutrients are 4-6 times more concentrated in microgreens than in the mature plant.

If you don’t like to eat your greens, this is good news for you. A handful of microgreens will substantially boost your nutrition without having to eat a mountain of veggies every day! (There are other good reasons to eat the mature plants like fiber intake, so maybe don’t skip them entirely.)

Microgreens Have a Unique Flavor

What do microgreens taste like is one of the most common questions we get asked, and it is one of the hardest to answer, but I’ll give it a try!

There is usually a similar vegetal flavor to microgreens, and the textures are pretty similar as well, which some variation in crunchiness.

Microgreens are Great for the Urban Garden

One of the reasons restaurants love using microgreens is because they can access them locally, and accessing fresh produce can be a challenge for restaurants in the heart of a big city.

Because microgreens can be quickly grown indoors, growers don’t need to move out of the city to grow them, and they meet the needs of their local restaurants.

Microgreens are Tricky to Transport

Most of us don’t consider all it takes to get the fruits and vegetables on the shelves in our local grocery store, but many of them have traveled thousands of miles to reach you, and not just the tropical fruits.

Microgreens are harder to find because once they are harvested, they have a relatively short shelf life of about a week, even in the most optimal conditions.

Some growers ship their microgreens without harvesting them, but this increases the cost to ship them. So, if you don’t have a microgreen grower near you, you might have difficulty accessing store-bought microgreens.

When you grow in an enclosed environment, especially when growing in a soilless medium, the need for treatments like pesticides and fungicides are greatly reduced. Because of this, many growers are able to offer organic microgreens to their customers.

Are Microgreens Expensive to Grow on Your Own?

Microgreens are not expensive at all to grow on your own for your own consumption. All you need is:

You don’t even need a green thumb because it is not all that complicated when you aren’t caring for a maturing plant. All you have to do is plant the seeds, water them, cover them until they start to sprout, then uncover them and let them grow while keeping them watered!

It is no different from growing anything else, except that you’ll harvest after about three weeks.

Are Microgreens Worth the Expense?

Just in case you weren’t sure, microgreens are definitely worth the cost. If you consider the health benefits of adding microgreens to your diet, even in small quantities, and their unique flavor that you can’t get anywhere else, you really can’t disagree!

If the price tag at the grocery store is holding you back, we encourage you to try to grow some on your window sill. They add a nice little pop of green to your home while they’re growing, and in about three weeks, you’ll have a delicious, fresh salad topping.